The Beautiful Face of Mary 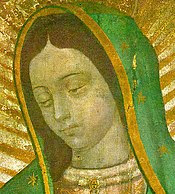 The traditions that depict the ancient saints according to various events of their life and attributes of their person are beautiful - and it is just as beautiful that there is variety in the different cultures and traditions within the depiction of the same saint.  Even Christ has a very broad variety of depictions in sacred images.

The Virgin Mary is no exception to this.  I have seen icons of our mother's beautiful face in so many styles and traditions - Byzantine, Japanese, Ethiopian, Renaissance and even Inuit, to name just a few.

Yet, in the case of the Virgin Mary, the most saintly of all saints, we have a special gift that we do not have for any other ancient saint; we have an exact image of her face.

From almost 500 years ago, we have this event:

'the peasant Juan Diego saw at the Hill of Tepeyac, near Mexico City, a vision of a girl of fifteen or sixteen years of age, surrounded by light. It was the early morning of December 9, 1531 (celebrated as the Feast of the Immaculate Conception in the Spanish Empire). Speaking to him in Nahuatl, his language, the girl asked that a church be built at that site in her honor; from her words, Juan Diego recognized the girl as the Virgin Mary. Diego told his story to the Spanish Archbishop of Mexico City, Fray Juan de Zumárraga, who instructed him to return to Tepeyac Hill, and ask the "lady" for a miraculous sign to prove her identity. The first sign was the Virgin's healing Juan's uncle. The Virgin told Juan Diego to gather flowers from the top of Tepeyac Hill.

Although December was very late in the growing season for flowers to bloom, Juan Diego found Castilian roses, not native to Mexico, on the normally barren hilltop. The Virgin arranged these in his peasant tilma cloak. When Juan Diego opened his cloak before Bishop Zumárraga on December 12, the flowers fell to the floor, and in their place on the fabric was the image of the Virgin of Guadalupe, miraculously imprinted there.' (from Wikipedia.)


One of the most miraculous parts of this image is that it remains in its original form, on the original cloth.  This is not an artist's rendition, an age-old tradition of depiction, nor someone's attempt to replicate what they saw in a vision; it is an image of the Virgin Mary directly imprinted on a cloth.

Basically, this means we know what her face looked like, at least in her early/mid teens when she bore Christ.  And as we know from Revelations chapter 12, in this apparition she is pregnant with Christ. (The image on the cloth is that described in that chapter.)

Recently I have been looking at this image and reproductions of it closely.  I am amazed by how beautiful her face is.  Yes, the image is aged, but it is not so hard to look past that.

Now, this does not diminish or remove the beauty or importance of the rich traditions of images of the Virgin Mary.  Yet, it is simply amazing that we can say that we have this direct image of her.