On Gin and Turpentine 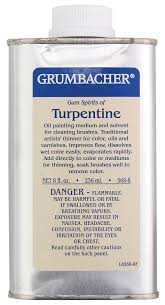 Having finally returned to my practice of painting, a couple of weeks ago I finally used up the bottle of odourless paint thinner (some sort of mineral spirits, taltine, I think.) So, for the first time in about 20 years, I bought a can of turpentine.

Expecting the worst, I opened it to find that I actually didn't mind the smell that much; in fact, it smelled rather appealing!

How could this be? From my early days of oil painting, I remember the smell of turpentine as one of the most wretchedly repugnant odours to be found.

Then I remembered.  Some time in 2012, I think, I discovered a few abandoned bottles of liquor in the house we are renting.  Among them, was a bottle of Hiram Walker's London Dry Crystal Gin.

I left that bottle for last, recalling horrible memories of the gin and tonic that friends had convinced me to try - possibly the worst liquor or mix I had ever tried - at least such was my opinion at the time.

The flavour of gin, you see, to me seemed nearly identical to the strong odours of turpentine that oil painting had made me hate so much.

So, after a time when I had finished the other bottles and only that one was left, it sat in the cupboard for quite some time, untouched.  I considered throwing it out, or giving it to some gin-loving friend of mine.

Finally, I decided to open it and give it a try. Still disgusting.  Still tasted like turpentine.  But now and then, I would have half a shot.  I actually started acquiring a bit of a taste for it.  I served it for guests, now unashamed to have it in my house. (No tonic; I would not spend money on buying something that tastes like carbonated salt water.)

By the time the bottle was gone, so was my dislike of the liquor.

I probably still wouldn't go out and buy a bottle of gin. But I would be glad enough if someone served me some (preferably without the tonic.)

So, opening this can of turpentine, I realized that I haven't changed my opinion that gin tastes like turpentine; but rather both - thanks to this old bottle of gin - have become rather pleasant rather than repulsive.

(Note: I still take due care with my turpentine and use it safely!)
Posted by Unknown at 6:56 PM