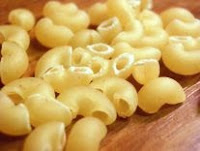 To be clear right from the beginning, I love Mexican food.  95% of it has amazing flavor, and I guess about 50% of it is at least somewhat healthy.  (The other 50% is definitely not healthy, but is really, really good.)

There are, however, a few gripes I have about Mexican cooking.  On a day to day basis, in homes and in standard Mexican restaurants there is one thing which Mexicans have a knack for doing entirely wrong: Pasta.

Do you now any rules about cooking pasta? If you do, most Mexicans will probably break all of them, and the consequence is not good.  Step by step, I'll explain how Mexican's cook pasta, and how that contrasts to what I imagine is right.

1.  Fry the dry pasta with onions.  Not conventional but so far, nothing horribly wrong.  The only problem is that Mexicans don't know how to use a low flame on the stove; they will always have the heat on the highest flame possible, and then wonder why the food burns in the 30 seconds that they're not watching.  Needless to say, too often the pasta comes out burnt around the edges.  If they would keep the flame low and stir it enough, this step may not be the worst thing in the world.

2. Boil the pasta in water.  Normally, this part is OK, but several times I've seen people put the pasta into cold water, and boil it from that point, making the pasta mushy (the general negative outcome of Mexican pasta.)

3. Add raw vegetables to the water.  This is where everything begins to go really down hill. The vegetables could include garlic, carrots, zucchini and chayote.   The problem is that these vegetables take much longer to cook than pasta, especially considering the fact that Mexicans like to overcook food - a point which works well with tacos, and other typically Mexican dishes, but not with pasta or vegetables.

4. Add tomato paste to the water/vegetable broth. Of course, tomato paste on pasta works well, but not when you add it to the same water that you boiled the pasta in.  Seasonings such as coriander (cilantro) and salt also get added.

5. Boil until everything becomes mushy.  Because of the love for for over-cooking, everything - veggies and pasta alike - get cooked much longer than the 7-10 minutes that are sufficient to cook pasta.  By the time the carrots are soft and mushy the way they like them (20 minutes or more), if you used macaroni, it would be the size of your thumb, and completely textureless.

The result is a watery, tomato-y mush full of soft vegetables and way over-cooked pasta, which is usually falling a part.   If there are left overs, it turns into a big lump in the fridge, or the pasta just falls apart completely.

Mexicans like to call this soup ("sopa.")  In fact, the word "sopa" generally refers to what we call "pasta;" for example, if they go to the grocery store and buy a package of macaroni, they will say they are buying "sopa."  It can also refer to really thick stews.  What we call "soup," they would call "broth" ("caldo.")  Even though I have no right to try to change Mexican Spanish, this is one point where I refuse to give in and use their terminology.  I believe that the use of the word is directly linked to this cooking monstrosity.  So, I resist, and emphatically tell people that I am buying or cooking "pasta", "spaghetti" or "macaroni" but I NEVER call it "sopa," hoping that this will reflect my intentions not to boil it into a mush.

To be fair, if done carefully, and the vegetables are left out, it can be OK, only when served immediately after cooking.  But I've only seen this happen two or three times.  This is also not isolated; I've had this kind of pasta-soup in homes and in restaurants in different parts of the country; it's a wide-spread problem.  Of course, if you go to a specialized restaurant, the pasta will be done correctly, and it can even be really good!

The frustrating part for me is that with the exact same ingredients, you could make a delicious pasta dish with a vegetarian sauce.  My chances of winning this battle are slim, since I'm resisting decades of habits for 100 million people.  But I won't give up, for the sake of Pasta and all those who love it.
Posted by Unknown at 7:41 AM

Email ThisBlogThis!Share to TwitterShare to FacebookShare to Pinterest
Labels: Food