How many friends do you have? 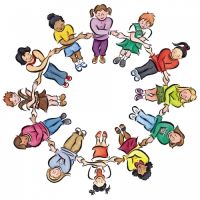 Most people can't put an exact number on this (unless you count the facebook number), but generally, if you have only a handful of friends, you'll probably consider yourself an introvert.

There are probably as many introverts in Mexico as there are anywhere else, but Mexican culture is definitely extrovert-focused and dominated; mixed with a good dose of chaos and seemingly irreconcilable contrasts, these are some of the aspects which drew me to Mexico in the first place.  For this reason, however, especially extrovert Mexicans can be alarmed and concerned by introvert behaviour, and their concern is re-enforced by cultural values.

In September, when my son who was just under 3 at the time started pre-school, he returned from school during the first few weeks to tell me and his mother that he played and worked alone; he didn't have friends, or even other kids that he just played together with.

The first day or two, my wife understood, but after a week and even more so after a month she was concerned, wondering if we needed a special meeting with the teachers or maybe if he was still too young.

When I was a kid in elementary school, I think I can count all the friends I had and played with for the entire 5 years on one hand, with fingers to spare.  I only ever played with 1 or, at the most, 2 friends, and avoided large groups of kids.  When there were visitors at home, I went to do stuff alone in my bedroom or sleep.  Of course, in junior high I made more friends, and opened up a little more in high school and beyond.

I told my wife this.  She wasn't shocked, having known me for a number of years now, but as a child she had been the complete opposite. Her dad would send her to buy something at the market on the corner, which should have been a 5 minute task, and an hour later he would have to go find her; she had stopped to talk to the neighbors, later she was chatting with the lady at the house ware booth, etc.  At family gatherings, she would get up and sing in front of her aunts and uncles.  I remember how much I hated when even a few of my aunts and uncles were focusing their attention on me to confirm that I still looked like my cousin (I wouldn't have minded looking like my cousin too much if she hadn't been a girl, but the unbearable part was being the center of attention.)

When we go to a party or to visit people, she enters the middle of the room, and begins to talk to just about everybody; I accuse her of picking the place where the majority of people can see and hear her, but she denies making any such decision - it's simply where she ends up.  My personal preference is to blend into some group near an edge of the room and little by little making rounds to talk to people, again, avoiding being the centre of attention.  This is difficult in Mexican culture since it's customary to greet everyone when you enter a social setting.  I got over this difficulty quickly, since Mexico leaves no room for hiding in the corner. As I mentioned in my last post, there's always the uncle who pulls you out for a shot of tequila and draws a lot of unwanted attention to the fact that you're not a part of the party; it's much easier just to go and greet everyone and dive right in from the onset.  My wife and I have been aware of this difference from the first months we knew each other.

After considering where our son's introvert tendencies came from, she became less concerned, and agreed that if he was happy, all was good.

Our son is less introvert that I am, and by month 3, to my wife's delight, he was telling us that he was playing and working with other children.

"How many?" we asked.
"A lot!" was his answer, spreading out his arms to emphasize the point - "a lot" is an expression which he liberally applies to any number greater than 2.  Recently he has even produced the names of the 3 children he plays with.

There are definitely introverts in Mexico, but I feel fairly certain that they are seen (and see themselves) as the "other people," the ones that are different from the norm.  Mexicans are, in general, fairly accepting of differences, but like to draw those differences out into the spotlight - a fact that can be uncomfortable for introverts.  Canada seems to let introverts keep to them selves a little more.

But, as the saying goes, if you can't beat'em you might as well join'em.  As a Canadian introvert living in Mexico, I've had to get used to letting myself be the center of attention, laughing at it, and even enjoying it. It's been good for me, just like it was good for my wife to realize that it was OK for our son to have only one or two friends, and even play alone if he wants.
Posted by Unknown at 11:43 PM