I have encountered a good deal of people, not to mention movies, that seem to believe that somewhere out there is some secret knowledge that is the key to all things.  Whether it was destroyed in the library of Alexandria, burned with Tenochtitlan or hidden deep in the "secret vaults" of the Vatican, there is some great knowledge that the powers that be have destroyed, repressed, hidden and forbidden the world from finding.  They know this knowledge will destroy their power (so the story goes,) so they spare no cost to keep it. (Think "Davinci Code," and the like.)

Others are content to believe that the secret is simply safely kept by a monk without any vice or plot living quietly in the mountains; it is not "protected," but has simply not been discovered by the world because we haven't taken the time out of our busy lives to travel to Tibet, wander down the mountain path barefooted and there meditate in this most perfect of monasteries.

Delving into the Darkness

Yet, there is something misleading - perhaps even poisonous - about the idea that truth can only be found in a deep and hidden secret that only few will ever find.  Those who choose this path are inevitably looking to obscurity, or - more concretely - to the darkness; after all where else are secrets hidden?

Those who continually delve into the darkness looking for what the light of the sun will  never reveal are always left uneasy and discontent that there is yet some greater secret that some greater power is maliciously hiding from them.  Thus, they are left digging deeper, winding further into the darkness in the hope of finding that secret that none other, or at least only few others, have discovered. Until, like the dwarves of Moria, they delve too deep.

Here we see Gandalf battling the Balrog which they awoke:

Tolkien and the Secret Knowledge

The fantasy of J.R.R. Tolkien suggest that he held a similar opinion - i.e. that looking for secrets in the darkness was indeed poison to the soul.  Here I will use some clips from the movies based on his novels to show the point more visibly.  Besides the dwarves, consider Saruman, who seeking to know the plans of the Enemy, became ensnared by him:

and likewise, Denethor, the Steward of Gondor, whose madness drives him to kill himself:

or Theoden, who was rescued from his darkness, but had sought the secret counsel of Saruman:

There are also the kings of men who became obsessed with seeking answers in the stars or locked away in their towers; the ones who considered the names of their ancestors more important than that of their sons.  Their nobility and kingdoms soon faded.

The Anxiety of Loss


One might note the anxiety felt by the characters of the Lord of the Rings who sought counsel in dark secrets found in the fact that they could not keep the Ring for themselves to keep in secret and use as a final and ultimate weapon:

A similar anxiety can be noted in the way of thinking discussed at the beginning of this post.


On the contrary, the noble and free peoples of Middle Earth - most clearly, their heroes - sought victory in open battle, sought joy in their families and neighbours, and dwelt in the light of day.  No seeking answers in the darkness. 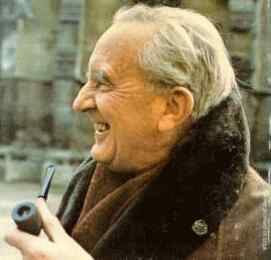 The Faith of Light

Faith in God is a faith of light, not of obscurity and hidden secrets.  God's greatest gift - salvation through the incarnation, death and resurrection of Christ - is most certainly a mystery, but by no means a secret.  It is not only "in the light," but it is in fact the source of light.  It is there in front of us as a free gift for everyone who is willing to receive it.
All of these characters, while not being evil in their beginning or (for the msot part) in their intentions ended up serving wickedness and coming to bad ends.

While Tolkien's fantasy cannot rightly be called allegory, Tolkien knew that faith in God is a faith of light, and that the desire for unknown secrets leads people to believe lies; this is clearly reflected in his fantasy stories.
Posted by Unknown at 8:51 PM